I finally received my package from Britain that contained my second pledge through Kickstarter, Blop Martian Explorer. This full colored 8×10 40 page book, with its collection of six stories turned out to be a fun little read that included a few extra goodies as well.

I’m always a fan of family friendly work as there are times during the week that I need to unwind and not read anything too “demanding”. Blop is one such book and I certainly hope that more volumes will be following in the future.

Looking through the book and doing a little background research of the creator reminded me what it feels like to see a finished book in ones hands. As I have yet to complete a full colored book myself (I’m working on it), it is my belief that Alan Hahn should feel a sense of accomplishment. I was excited to hold his graphic novel in my hands.

As I flipped through the brightly colored pages, it reminded me that I need to get my own butt in gear and finish one of my own projects. 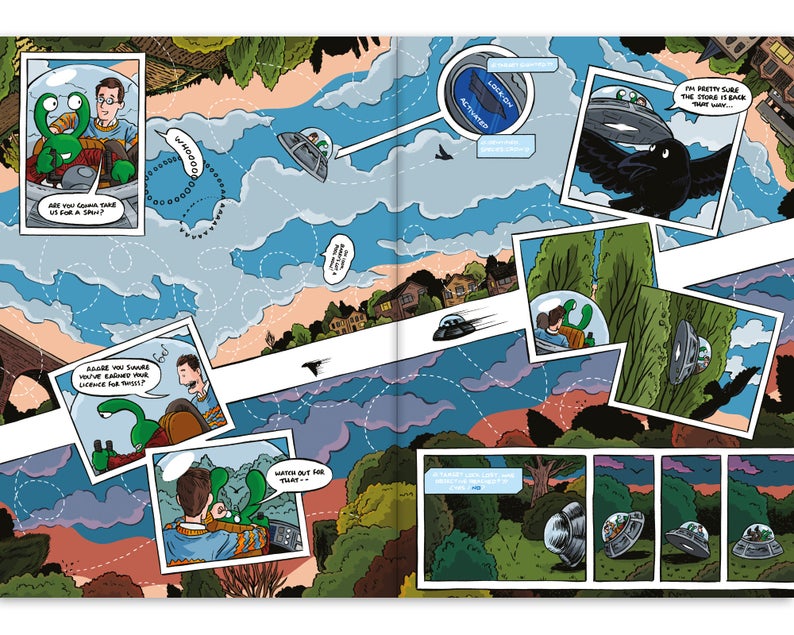 I recently put together a 12 page ashcan comic of my first completed story in 5 years for a brief and small book signing which is taking place today at my local library (I am one of 20+ authors showcasing work).  Upon looking through this short story, I realized that I am WAY behind schedule my own internal schedule. In order for me to “catch up”, I decided to devote a couple of hours each day to doing something creative after work. It could be drawing a page to attempting my own coloring for ASININE. Regardless, sitting in front of the tele during the week is not conducive to getting my work out in the world.

Mr Hahn worked hard to get this book in his pledge’s hands. His book reminded me of my own work ethic while I was putting together my previous publications and how much work I was able to produce when I was freelancing. I may not have all the free time I had when I was freelancing but I do have plenty of free time after dinner. I don’t need to devote ALL of it to being creative but I can sure devote a hour or two.

So, I have attempted to set a goal of doing work that I have been promising myself in my mind’s eye for half a decade. Get my stories done.

One year 3 months later, ASININE! has been released and I finally reached out to Alex to asked him a few questions about his Kickstarter project. During that time, much of the world has changed. I have been watching projects I have pledged for have shipping being delayed and the reduction of other creator’s project work being available thorugh crowdfunding. From my own project, due to the Covid,  I decided to not allow international shipping be available. If I did, I would have had to charge between $20-40 just to get my 32 paged comic to foreign fans. This really limited the reach but I felt it was a necessary risk that I hope to rectify in the future. Knowing that Alex is also a freelance artist, I wanted to get his take on his own difficulties not only getting his work out but also how his current work is challenged due to Covid:

I asked, “Has the current epidemic been limiting on getting the word out about your work? How have you worked around it?”

Definitely! One of the main ways people discover my work is through conventions where I can engage with people about my work, while they can actually pick it up and look. There’s no way to properly replicate that experience online. I imagine it will probably be late this year or even 2022 before I’m able to attend events like these again.

I’ve continued to use social media to display and talk about my work, but that feels like a constant battle against algorithms that have no appreciation for art.

The main way I have used the lockdowns (now in our third!) was to start telling a new Blop story, through a daily strip. I’ve currently completed 211 of them. This project has helped me keep a structure and routine to my days, as well as regular posts to remind people I’m still here!

As I started researching Kickstarter in early to mid 2019, I began noticing that some projects would start and then abruptly be stopped or be canceled. Blop was one such project and  I got a chance to ask about the specifics from Alex:

Initially, I overshot with my goal and the rewards offering/proposed number of copies. It’s really easy to get caught up in “an extra fifty copies only costs this much extra!?!” when looking at printing quotes.

So rather than ride out a campaign that would likely fall short, I took what I’d already learned and returned straight away with a more streamlined and realistic goal.

I am a traditional artist. This means that I still draw by hand and use the computer to add or improve upon my work. Though I was sure Alex operated the same way, I still wanted to share his method of how Blop was produced:

I ink directly over my pencils, in a traditional way. I prefer inking with a brush or brush-like alternatives, like the Pentel pocket brush. I’m still not a fan of inking my work digitally, though I fully embrace Photoshop for the editing and colouring; I assemble everything in Adobe InDesign.

Upon re-examining Blop as a body of work this week, I am still impressed on amount of thought that was put into the stories. The main story, What on Earth Do You Mean?, emphasizes the importance of taking things too literal. Blop is explorer who’s mission is to collect data for his people. What he learns is that the human language can be tricky when it comes to metaphors and literal sense. The confusion causes miscommunication that leads to frustration with amusing results for the readers. Not so much for Blop who’s interaction with his foster human family leaves him not only confused but influenced by their take on language.

I got a chance to ask Alex where the character of Blop came from:

I created Blop during a creative writing class at Cambridge School of Art. The assignment was about a story from an alien’s perspective, for which I wrote about Blop being confused by the idioms we use in conversation.

Since then I kept putting Blop into projects and short comics, which started to flesh out his world. The longest story in the book ‘What on Earth do You Mean?’ is adapted from that first idea.

As a fellow creator, I am always curious as to why an artist feels their need to share their creation with the world. Alex’s response was this:

Having had Blop show up in lots of my work – as well as become a mascot for my publishing ventures (BlopShop) – I felt it was past time to have an album-sized book and begin a ‘canon’ of stories and see who responds. The emphasis I want to put on the series is about fun and being able to escape into a crazy cartoony world, no matter your age or background.

As I have done my own book projects in the past, they have always been black and white. ASININE! was the first project I have ever done that was fully colored. I was additionally curious to get another creator’s take on the work load for this 40 paged anthology. Was the experience of producing Blop a rewarding or time consuming experience for Alex?

Both! Going back to lessons I’ve learned, I would recommend having the majority of the project completed before running the campaign, as trying to draw the comic while promoting the project was a struggle. The amount of admin to run and deliver the campaign is a definite downside, but this is very much offset by the way it can build an audience and reach new people – about half of my backers were from outside the UK, and being able to get my book in front of people who might not have seen it otherwise is the best feeling.

As Blop was the first original work I pledged for on Kickstarter, the end product really reinforced my desire to finish my own project. One of the main aspects that struck me most about this project was the presentation or, more importantly, the book binding by Mixam.com. This company is the one that I ultimately went with for the printing of ASININE! I was quite happy with the end result of my own product and wanted to know Alex’s feelings about this particular printer:

Overall I feel happy with the job they did on ‘Blop: Martian Explorer’, once they fixed a quality control issue. I’ve used Mixam for several projects (mini-comics, posters, business cards etc) before, so I’m used to how they operate. Within the UK small-press scene they have a mixed reputation; from my experience, quality issues arise when they outsource projects to other companies to meet their quoted delivery dates. For my most recently printed book: ‘A Cat Called Yuki’, I made sure to stipulate it be produced in-house.

Having gone through my own experience doing a crowdfunded project (Kickstarter) last November (2020), I was curious to get input from another creator as if they would considering doing more funding this way in the immediate or distant future:

I think so. The first time is a steep learning curve, but now I’ve been through that and came out with a funded project, I feel I would be able to run a smoother campaign in the future. It’s something I’m considering for the next Blop book, that I’ve been serialising since April last year.

On that note, make sure to become a fan of Alex’s on Facebook to see glimpses of that work in progress.

Thanks to Alex for answering my questions plus making Blop available through this venue! It was exciting to not only receive a signed copy in the mail from across the pond but also to be mentioned as a contributor to making this project a reality.

One of the unique aspects of Kickstarter is exposing your work to a much broader audience then was previously available in the past. Without it, I would have never had the opportunity to discover this friendly alien explorer that could easily fit in my my own Critter characters!

Those who know me know that I never lend out copies from my library because I’m greedy, selfish, and a comic hoarder. So, you can get your own copy of Blop Martian Explorer directly from Alex on Etsy @ Etsy or on Amazon.com @ Blop on Amazon

Anthony Feinman has studied briefly at The School of the Art Institute of Chicago (2008-2009) for cartooning, photography, and graphic design. His photo work has been seen in such publications as: Herscher Press/Reddick-Essex Courier, The Times-Press, The Paper, and The HeartBeat. Anthony currently does freelance photography work in Central Illinois and Indiana. He is author/illustrator for the graphic novels, Escape in a Dirigible (2004), Blitz Howser (2012 co-written with Andy Hall), The Magic Press (2014) and Tears of the Prophets (2016). His photography and pagination skills can also be seen in Myke Feinman's children's story, In Search of the First Teddy Bear (2002) and the novel, The Teddy Bear Conspiracies (2004). He has released the long lost pulp magazine, SUPERLATIVE TALES, (2006). He is currently working on illustrating the last Terry Freedom story, The B.U.C.K.S. Stops Here. He also started a new Critters story line that may lead to a follow up book being released after 2021. 2021 has now seen the funding of Anthony's standalone comic book, ASININE!, funded through Kickstarter. View all posts by Anthony