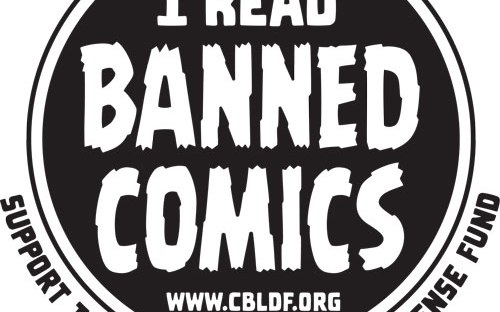 Banned book week is coming up (9/23-9/29/18) and comics have been no exception. Most of the time, the reasons for the ban is due to something sexual being depicted whether it’s an illustrated sex scene, a writer’s depiction of someone’s sexual orientation, or “bad” foul language being used. My work has been no exception.

When I was working on Blitz Howser, created and co-written by my good friend Andy Hall, I decided to upload the work on Comic Fury to elicit fan/reader response. (The complete comic can be viewed FOR FREE here.) On the fifteenth strip, I wrote the opening statement that Blitz was using an old sock as a smelling salt due to his half Jewish heritage and being cheap. It elicited a response from a reader who was fond of the strip but took offense and called it anti-Semitic and stated that they would not be subscribing to later postings. I found the comment amusing as I am half Jewish. I thought it would be obvious as my last name is…wait for it… Feinman.

It should also be noted that I am not self-loathing or hateful towards myself or the Jewish community that I am loosely connected to. I responded (which can be seen on the post) to no further response by this person I would call a fan. However, several strips later, the same commenter would later post a favorable comment about my work. See? A fan. They may not have subscribe but eventually went back later to see how the story unfolded. I still find it odd that my one line of a character being half Jewish was overshadowed by the entire work portraying scantly clothed (busty) females (Blitz’s wife Eva, Princess Shira and her hand maiden) running around being bossed around and Blitz calling the women “broads”, “dames”, and “squishy lips”.

He is generally being EXTREMELY sexist throughout the strip. The “half Jewish” line that I put in was never meant to elicit a response. It’s a joke about someone doing something so extreme because he is trying to NOT spend money. An act that no “real” person would do. An act that only a CARTOON character would do.

I can only surmise that my commenter is a fan of Eric Cartman from South Park as well. He hates the fact that Cartman makes fun of Kyle Broflovski (a Jew) but still laughs at the jokes anyway.

I wanted the scantily clothed women and dialogue to elicit the response. (I was basing the work on old Flash Gordon and Buck Rogers comic strips. The main protagonists are extremely sexist towards the women in those earlier strips. Female and male flesh are rampant throughout this work as well. Oh, no! Run for the hills, Mae Barker!) These facts are have never been questioned nor brought up by any fan/reader. EVER. My point is that Blitz’s attitude towards women is deemed acceptable by this reader but not a line about a person being cheap for using an old sock as a smelling salt? Oh, wait, let me be correct on this point. A half Jewish CARTOON character set in the mid 1930’s who is being cheap by not spending fictitious money for a first aid kit that may or may not have smelling salts. Are smelling salts even included in modern first aid kits today? (I checked at my current place of work just to be safe. None are part of the kit.) I can’t help but laugh and think, what’s wrong with this picture?

It has been proven that once something (literature, art, any type of media) has been labeled as “banned” or offensive, then everyone wants to know what it is. I guess I should be somewhat happy as that helped bring about SOME attention to my work.

There are many comic/graphics novels that have been labeled as subversive that I have submersed into my reading list. None of the comic work I have read thus far has ever offended me. Perhaps my upbringing was too liberal. Or perhaps the general public’s version or idea of what’s PC is extremely old fashion. Most people that advocate work being banned do so based on their belief of a moral high ground or claim, “What about the children?” Guess what? Children need to grow up and face the world. Bigotry exists. Sexism exists. Case in point, our current president. Unfortunately, every bad thing under the sun that is deemed inappropriate and branded or brainwashed into us at a young age doesn’t just disappear by turning a blind eye. It’s still there and parents need to be teaching their children what these wrong acts or behaviors are so they understand why they exist. These acts exist to teach us to be better people and to avoid these types of behaviors.

Most people forget that they have a choice in what they watch, read, or immerse their lives in. You don’t like something or a comment someone else makes? Get over it and move on. People are inherently stupid and always will be. Myself included.  In the case of my commenter on my half Jewish remark, they didn’t like it and could have stopped reading my work. They choose to come back and finish the work. What does that say about our current society? (I should also note that the events I have been describing about my comic  took place before the last election many years ago. Little or nothing has changed in five years on society attitudes.)

I can’t help but think of a couple lines from The Simpsons episode, Homer vs. Lisa and the Eight Commandment

Marge Simpson: I ate two grapes. Please charge me for them.

My feelings exactly, “Who cares?”

Read whatever you want. I don’t care. Just don’t complain to me that you read it and didn’t like it and then come back and tell me how great I am. That sends me mixed messages and makes me confused.

I’ve already accepted the fact that it is human nature to be stupid. The hardest part is realizing it and growing from it. Can you?

I will be signing copies of Blitz Howser and other “subversive” books on September 22, October 28th and November 17th, 2018.

Anthony Feinman has studied briefly at The School of the Art Institute of Chicago (2008-2009) for cartooning, photography, and graphic design. His photo work has been seen in such publications as: Herscher Press/Reddick-Essex Courier, The Times-Press, The Paper, and The HeartBeat. Anthony currently does freelance photography work in Central Illinois and Indiana. He is author/illustrator for the graphic novels, Escape in a Dirigible (2004), Blitz Howser (2012 co-written with Andy Hall), The Magic Press (2014) and Tears of the Prophets (2016). His photography and pagination skills can also be seen in Myke Feinman's children's story, In Search of the First Teddy Bear (2002) and the novel, The Teddy Bear Conspiracies (2004). He has released the long lost pulp magazine, SUPERLATIVE TALES, (2006). He is currently working on illustrating the last Terry Freedom story, The B.U.C.K.S. Stops Here. He also started a new Critters story line that may lead to a follow up book being released after 2021. 2021 has now seen the funding of Anthony's standalone comic book, ASININE!, funded through Kickstarter. View all posts by Anthony